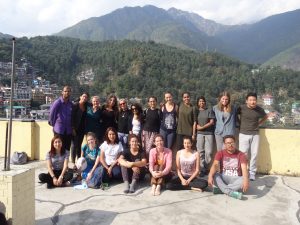 On the rooftop of Tibet World; ANEC volunteer Maria Laura Ebensberger led an energizing yoga class for beginners. It started with a more traditional warm up, followed by some classical sun salutations. The group then grounded themselves in some strong warrior and other standing postures. Calming down with supine twists the class ended with savasana, corps pose. Back in the Tibetan Career Centre Maria Laura talked about the history and philosophy of yoga. Yoga means ‘to unite’, namely the individual with the universal consciousness but also body, mind and emotion. 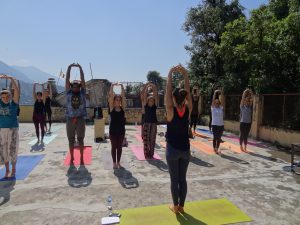 After Lunch; Miss Tenzin Lhamo, ANEC Assistant Trainer introduced ‘Nonviolent Communication’ and she explained the two ways of communicating and four components of NVC by asking two volunteers from the participants to do role play in a dialogue form. She also spoke on various means of nonviolent communication which helps in identifying the cause and how to deal with the negative emotions rather than suppressing or repressing it.

ANEC Assistant Trainer also spoked on the four choices of hearing a message.

The last part of the workshop consisted of a gentle Yin Yoga class on the rooftop of Tibet World. Maria Laura opened the class with alternate nostril breathing, a pranayama breathing technique that calms the nervous system and balances the body.

A day long workshop was attended by 19 people from 12 different countries. 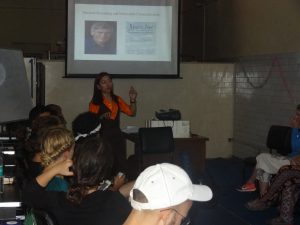