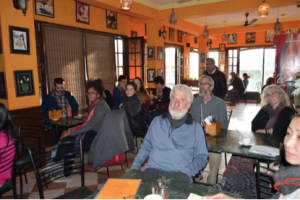 On the 9th of December, 2016, ANEC held a screening of the documentary “Leaving Fear Behind.”  The screening was held at Jimmy’s Italian in McLeod Ganj at 3:30 in the afternoon.  Approximately 24 people from a variety of nationalities (Tibetans, Indians, Frenchmen, and Americans) were in attendance.  ANEC volunteers,Miss Amanda Clayton and Miss Meredith Tolleson, ran the screening.  Clayton opened the event by giving the audience a detailed description of ANEC, its mission and history.  Following her speech, Tolleson explained the broader context and history of the documentary in order to help the audience comprehend what they were about to watch.  The 24 minute documentary was subsequently screened. 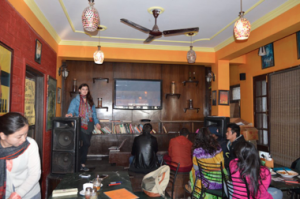 Miss Amanda Clayton opened the event by giving the audience a detailed description of ANEC, its mission and history.

Leaving Fear Behind is a compilation of footage captured in Tibet during 2008 by filmmakers Dhondup Wangchen and Jigme Gyatso.  In order to gather over 40 hours of video footage, the filmmakers filmed 108 Tibetan people inside the eastern regions of Tibet. 20 of these interviews are featured in the film.  The New York Times calls “Leaving Fear Behind” “an unadorned indictment of the Chinese government” because of the central themes discussed.  The movie examines ordinary Tibetans’ opinions on the Dalai Lama, the choice of China to host the 2008 Summer Olympic Games, the Chinese government, and the mass migration of Han Chinese immigrants to Tibet.  The critical stance of this film led to the imprisonment of both filmmakers, Dhondup Wangchen for 6 years and Jigme Gyatso for 7 months, and the content had to be smuggled out of Tibet for production in Switzerland.

The film screening was met with a positive response and constructive dialogue from all 24 people in attendance. Volunteer Miss Meredith Tolleson, led a discussion around three questions, first having those in attendance break out to discuss in smaller groups, and then having the smaller groups report aspects of their conversations out into the larger group. 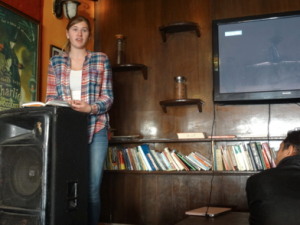 Miss Meredith Tolleson explained the broader context and history of the documentary in order to help the audience comprehend what they were about to watch.

First, the group answered the question “Should there be conditions that countries must meet if they are to host an international event such as the Olympic Games.  Second, the group held a conversation on the question “If China is to be given the honor of hosting the Olympics in a later year, how can nonviolent tactics be used to bring attention to the Tibetan struggle.  Third, the group held a discussion on the question “Since China is trying to eradicate Tibetan culture and language, how can nonviolent tactics be used to keep the culture alive The discussion allowed the group to reflect on their experiences and their opinions of the world and think about ways to channel their energy into nonviolent means of advocacy for the plight of Tibet.  Overall, the documentary screening was a successful event.