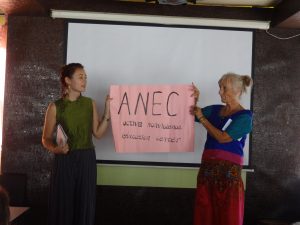 017; the ANEC volunteers Maria Laura Ebensberger, Helene Weynerowski and Li Zhongqin presented the movie “Dispatched: Undercover in Tibet” in the Drumstick Restaurant in McLeod Ganj. 27 people attended the event and put their names and Email addresses down for further information.

After shortly introducing themselves, Maria Laura talked about ANEC and Helene about the movie. Maria Laura explained what ANEC stands for, its philosophy and history. She talked about the achievements and next projects of the organization. Helene prepared the public emotionally for the rather challenging movie, reminding them to stay grounded.

The movie showed how Tibetan exile Tash Despa returned to his homeland after eleven years. Risking imprisonment and deportation he filmed Tibetans talking about torture, forced sterilization and religious discrimination. He uncovered how the Chinese government violated basic human rights, such as random imprisonment without trial.

To open the discussion Helene recited the poem “Never Give Up” of His Holiness the 14th Dalai Lama. After som 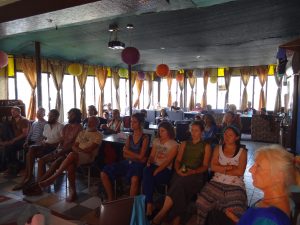 e silence a young Australian asked the question of what the ordinary person can do. Some of the presented ideas were practicing non-violent dialogue, volunteering for a Tibetan NGO and raising awareness in general. Another proposition was responsible consuming behavior, by buying local and fairly produced products.

One Tibetan stood up and hold a speech. He stated that the Chinese government occupied Tibet for military and economic reasons, its altitude and richness in mineral resources playing a big role. He talked about the danger of the increasing immigration of Chinese and criticized “our leaders” for not taking enough action.

“There are over 1.3 billion Chinese compared to six million Tibetans”, said Wangdue Tsering Kharlo, ANEC’s Executive Director. “China has the largest army of the world”, he continued and explained why a violent uprising would be fatal for the Tibetan community.

The discussion continued in smaller groups and slowly found its end. The feedback for the event was good, with many people expressing their gratitude before they left. 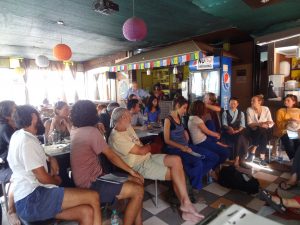