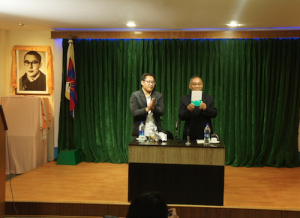 The book titled Tsey-Mey-Shiwey-Pho-nya (Eng: Messenger of Nonviolence) is a compilation of articles written by students, teachers and the general public as part of a competition conducted by the organisation to raise the public’s interest and awareness on the subject.

Releasing the book, Education Kalon lauded the noble works being performed by the organisation, which is in tune with the principles espoused by His Holiness the Dalai Lama in his efforts to promote a more peaceful and harmonious society.

Kalon further extolled non-violence as an imperative moral belief for the 21st century and a potent tool to make any movement successful. He cited examples of India’s freedom movement, the civil rights movement of the US and the anti-apartheid campaign in South Africa as some successful movements defined by non-violence.

He recalled Mahatma Gandhi as one of the leading exponents of Non-violence that the world has seen and exclaimed that Gandhiji’s principles and views are worth studying and implementing in our daily lives. 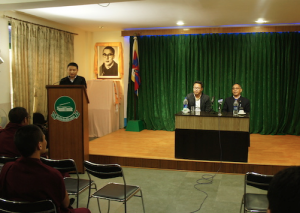 Kalon also paid tributes to His Holiness the Dalai Lama as a champion of active non-violence and said that it is a matter of pride for him to be a follower of one of the most widely respected and loved spiritual figures in the world. He said His Holiness the Dalai Lama epitomises the messages of peace and non-violence that the world is currently in need of and expressed the education department’s fervent efforts to inculcate these values through academic curriculum in schools.

Mr Wangdue Tsering, Executive Director of ANEC, explained the organisation’s goals and activities, and highlighted His Holiness the Dalai Lama as an inspiration to move forward through non-violence in their works.

The book-release ceremony also felicitated the winners of the essay competition.

The launch ceremony of the book on non-violence was held on this day – 9 December – as a precursor to mark the 27th anniversary of the conferment of Nobel Peace Prize on His Holiness the Dalai Lama, which is celebrated with much fanfare every year on 10 December.