HUNDREDS OF THOUSANDS of people have taken to the streets of Hong Kong in response to the government’s proposed bill to allow extraditions to China.

As a special administrative region, Hong Kong has maintained some autonomy from the People’s Republic of China – including a free press and independent courts system – since the British colony was handed back to China in 1997.

Hong Kong’s chief executive Carrie Lam is pushing a bill to allow extraditions to China in a move that protesters see as a weakening of that autonomy, and one which some say is designed to appease Chinese president Xi Jinping’s attempts to strengthen control over the region.

In the biggest mass demonstration in five years, protesters were met with police officers who sprayed tear gas and fired rubber bullets this morning.

Demonstrators have blocked main routes in the city, while a number of businesses have shut with unions backing this action in a show of support.

As tensions continue to mount and the Hong Kong government finds itself stormy waters, TheJournal.ie is looking at how the conflict began in a small democratic region which lies in the shadow of China.

Is Hong Kong part of China?

Hong Kong is part of China but it is a semi-autonomous region, meaning it has its own administration and government. This stems from the British Empire’s control over Hong Kong for more than 150 years – before it was then handed back to China in 1997.

As part of the reunification process, it remained a special administrative region under the ‘one country, two systems’ framework, which allowed it to keep its own independent judicial system, separate to Beijing.

There are a number of significant differences between China and Hong Kong, namely its civil service, a free press and other democratic systems.

Since reunification began, there have been tensions on both sides, with rising concerns that Beijing is attempting to regain full control over the region.

For now, a mini-constitution known as Basic Law guarantees a high degree of autonomy to Hong Kong but this is set to expire in 2047 and both sides will have to renegotiate the ‘one country, two systems’ framework again.

President Xi Jinping has warned against any dissent against China from citizens in Hong Kong, and despite being considered a separate autonomous region, Beijing still asserts a lot of influence.

So what exactly is in the proposed extradition bill?

As it stands, Hong Kong can only extradite people to countries with which it has extradition agreements and all other requests, including those from China, are dealt with on a case-by-case basis.

There is no formal arrangement for extraditions between China and Hong Kong.

Any change to this would have to be reviewed by the Legislative Council, which is headed up by the chief executive Carrie Lam.

Lam was backed by Beijing for the top role during a nomination process in 2017 and she is seen as a key figure in the push to pass the extradition bill.

If passed, it would allow Chinese authorities to take people it deems to be criminals into custody in mainland China.

Critics say the new legislation would damage the independence afforded under Hong Kong’s own judicial system.

“The proposed changes to the extradition laws will put anyone in Hong Kong doing work related to the mainland at risk,” Sophie Richardson, director of Human Rights Watch said.

“No one will be safe, including activists, human rights lawyers, journalists and social workers,” she said.

Fears are mounting that as this law offers more power to China, anyone seen dissenting or disagreeing with the Chinese government could be detained and brought to the mainland.

In 2015, five Hong Kong booksellers were reportedly abducted and detained in mainland China for selling books which reported details on Chinese politicians – books which Beijing considers to be ‘sensitive’ material. 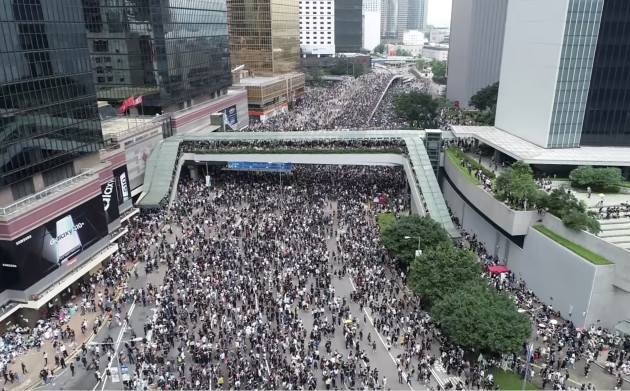 Up to half a million people are thought to have joined the protest in the streets.Source: AP/PA Images

So why is the Hong Kong administration pushing forward with the bill?

The administration claims it would close a loophole and fast-track the extradition of fugitives and criminals in Hong Kong. Activists reject this and say it is bowing to pressures from Beijing, particularly as the Beijing-backed Lam is driving the bill forward.

Lam said she never received any instruction or mandate from Beijing claiming, “We were doing it, and we are still doing it, out of our clear conscience and our commitment to Hong Kong.”

So what is happening now?

Both sides have maintained a poker face in the dispute – with activists promising more protests and Lam promising the bill is going to be passed by the administration.

The Legislative Council is set to vote on 20 June. Whether or not the protests delay that or see the bill removed altogether remains to be seen, but previous protests have had little effect on decisions made at government level.

In 2014, in what is now known as the ‘umbrella movement’, thousands of protesters marched through the city to oppose a separate move which gave the 1,200-member election committee – with a majority of pro-Beijing politicians – powers to vet potential election candidates in Hong Kong.

The protests continued for more than two months but eventually fizzled out. This renewed episode of protest appears to be the second coming of what was then considered to be a new generation of youth activists engaging with politics for the first time.