October 2nd is celebrated as Gandhi Jayanti to mark the birth anniversary of Mahatma Gandhi. One of the biggest political figures in India’s struggle for independence in 1947, Gandhi was the man behind the Satyagraha movement and civil disobedience, based on non-violence.

This year marks the 150th birth anniversary of Mahatma Gandhi and to celebrate it, Active Nonviolence Education Center organized a talk on “Introduction to nonviolence”.

The talk held in Upper TCV school was attended by children from 11th and 12th grade. Gen Ngawang Woeber (former political prisoner and former director of Gu chu sum) introduced the children to concept of nonviolence, its benefits, and accounts from his own nonviolent movement in Tibet. Geshe Ngawang Sangye (Geshe from Drepung Losesling Monastery) talked about nonviolence by citing four verse from Bodhisattvacaryavata or the Bodhisattva’s way of life. Geshe first three verses came form fifth chapter ” Guarding Awareness” and his final verse from the sixth chapter “the practice of patience”. After the talk, children raised questions and duly filled the feedback form. Not only was the event successful but the students received it very well. 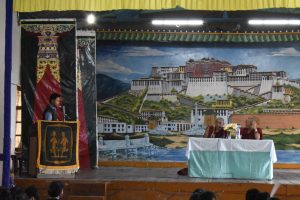 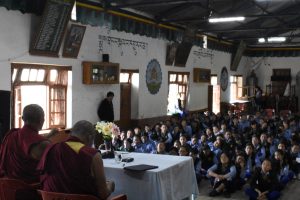 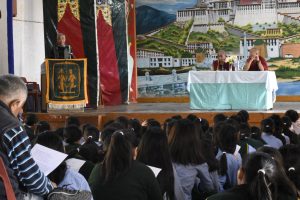