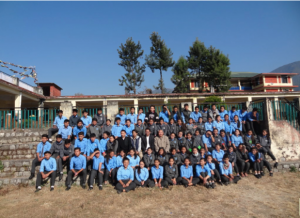 The participants of one-day workshop on Universal Nonviolence along with the ANEC staff and Mr. Bhutuk Shastri, principal of Sambhota Tibetan School, Chauntra

Mr Bhutuk Shastri, principal of Chauntra Sambhota School inaugurated the workshop by welcoming ANEC staff. He has spoken on the importance of such workshop, and also said such kind of workshops normally takes a week but due to the time constraint this been arranged for a day. He further advised the students to take the best out of this workshop and it will benefit them for a lifetime.

Seventy students from class ninth and tenth participated in the workshop. The important topics like; “Philosophy and Pragmatism of Nonviolence”, “Reasons for Nonviolence” and “Why Tibetans should follow the path of nonviolence”, “Chinese pillars of support” were focused during the workshop.