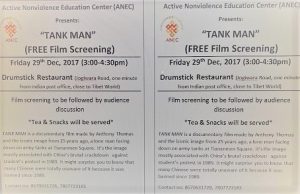 On Friday 29th of December, 2017 ANEC held a screening of the documentary “The Tank Man” – the Story of Democratic movement in China. The Screening was held at Drumstick Restaurant in McLeod Ganj between 3:00 to 4:30pm in the afternoon. Around 15 people joined the screening from different part of the world. Mr. Jigme, Accountant and Office Secretary of ANEC, displayed the movie and Miss Tenzin Lhanze, the Assistant Trainer and teaching officer, gave a detailed introduction about the work ANEC is doing. Mr. Thupten Choephel, Trainer and Research officer explained the context and history of the documentary to audience comprehend what they are about to watch. The 1 hour 15 minutes documentary was screened. 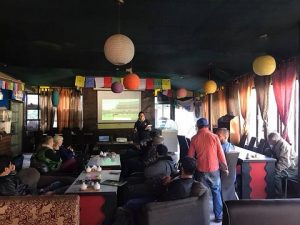 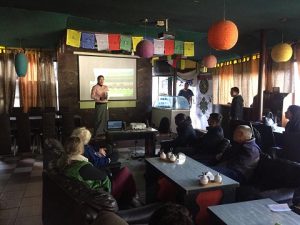 “The Tank Man” is a documentary film by Anthony Thomas, It portrays Chinese aspiration for a democratic change. Tiananmen incident initially started as a memorial for the death of reformed minded leader Ho Yaobang and 6 weeks long nonviolent protest with crowd of more than 1 million at Tiananmen Square was forcefully attacked and suppressed, resulted in killing 10,000 and 10,000 were put in to prison. It was consider as the darkest day in the history of China. 4th June 1989 Tiananmen protest happened as a result of 40 years of repression, rampant corruption by party member, unequal distribution of resources and continuous exploitation of laboring masses. Many of us remember this historic massacre through one iconic image called Tank Man. He is just an ordinary person who showed extraordinary courage to resist the evil by blocking the Tank in the middle of street on 5th June 1989. This iconic image became inspiration to many of democratic revolution around the world.

The movie was followed by an open discussion where all the attending people could express their thoughts and feelings about the movie. The opening statement was made by Thupten Choephel, who claimed that Democratic China is in the interest of many Chinese as well as the wider international community. Democratic China is the only answer to many of problem China is facing right now. Participant Lhasang Tsering talked about the unnecessary huge expenditure

on militarization on both side of Tibet, China and India as a result of Chinese policy of expansionism and threaten India’s security. India also spend huge money on defenses purpose in Kashmir since Chinese sponsored al-Qaeda gained much support to disturb the peace in the country. Both India and China was much impoverished by the huge military expenditure extending the economic growth of both the nation. If Tibet were a free nation and buffer zone between two giant nations, economy of this country will improve enough to benefit the global economy.Participant Neil Greenwood a writer from England expressed deep sense of solidarity with victims of Tiananmen massacre and to those who continue to suffer under brutal oppression. He is very optimistic by saying wind of change is coming soon. “The journey of a thousand mile begins with one step”.

The audience had a really engaged discussion. In order to raise awareness in the west about the human right condition under communist party. Being moved by the topic English young writer willed to incorporate the issue in his writing in future. Overall, the documentary screening was a successful event. 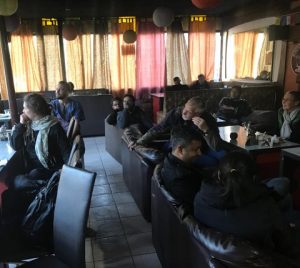 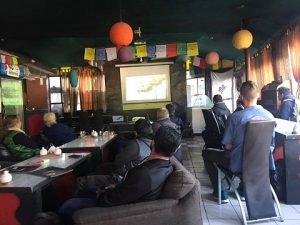